Our Cuba Travel Guide will help you experience the beautiful country like a local. Explore the city of Havana in a classic 1950’s car or enjoy the live music scene in Trinidad, Cuba offers everything from turquoise waters, historical sites and a vibrant culture

We have rounded up 10 things to see and do in our Cuba Travel Guide to give you a unique adventure. Travel back in time and immerse yourself in Cuba’s history and beautiful sites.

There are few sights more emblematic of Cuba than the classic 1950s American muscle cars that are still prevalent throughout the country. In Havana, these classic cars are the best way to explore the further reaches of the city, especially if you’re strapped for time. While sedan-style cars are available, convertibles are the gold standard here and there’s nothing like feeling the wind whip through your hair while driving down the Malecon, Havana’s seaside boardwalk. Your hotel or guesthouse can easily organize a car for you – expect to pay anywhere between US$40 to US$50 per hour.

Across the Bay of Havana, the neighborhood of Casablanca is worth a couple of hours. There are some great beaches in the area if the weather’s good, along with fantastic views over the main part of Havana city. If history’s your thing, you can check out the Cuban Missile Crisis museum, see the fortress of San Carlos de la Cabaña, and grab an Insta-worthy snap with the Christ of Havana statue. If not, you can always grab a delicious meal at El Cañonazo. 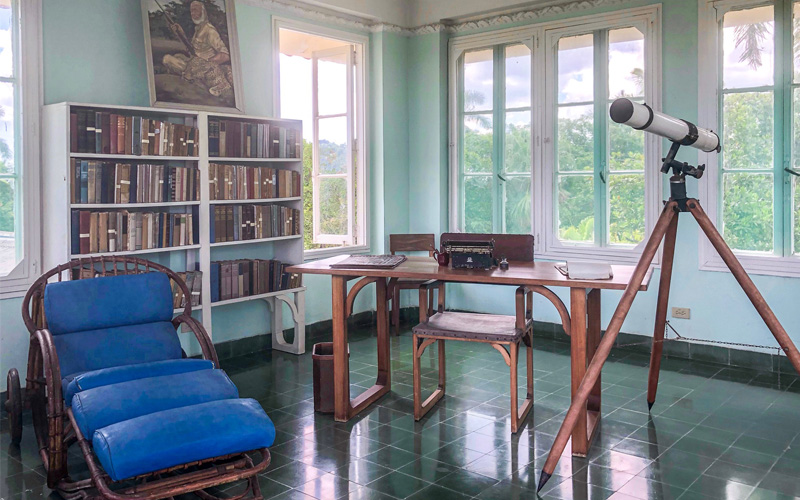 Ernest Hemingway’s love affair with Cuba is the stuff of legends, so you are in the right place to explore all of “Papa’s” favorite haunts. Luckily, most of them can be found in Havana. Hemingway was a notorious drinker, so slip into La Bodeguita del Medio to enjoy his beloved mojitos, then head over to Floridita where you can share your daiquiri with a bronze status of the man himself. Thirty minutes outside Havana, Hemingway’s Finca Vigia country estate has been carefully preserved – you can even see Pilar, the boat that Hemingway allegedly carried out off-the-books CIA missions with.

A landlocked area in western Cuba, Viñales is actually a national park that features sweeping landscapes of tobacco and agricultural fields interrupted by towering limestone outcroppings. This is some of the most picturesque scenery in the country, and hiking through the valleys or up through the mountain caves is the best – and most ethical – way of exploring the area.

Cigars are a way of life in Cuba, so there is no better place to learn how to smoke properly. You will have the option of visiting high-end cigar factories from Havana, but if you want the real local experience, you will need to go to Viñales. Here, you’ll be able to walk through tobacco fields, see how farmers cultivate the tobacco used in the world’s most expensive cigars, and watch how cigars are made by hand in this area. If you’re game, you’ll be given a lesson in how to smoke cigars like a local that includes everything from how to cut the ends to how to hold it to maximize smoking time.

With its Spanish heritage, the southern town of Cienfuegos is an architectural marvel in its own right. But the real gem is the regal Palacio del Valle that sits by the ocean. Built in the early 20th century by a merchant who wanted to prove his wealth to a potential bride’s family, the historic villa was rendered in spectacular style. Today the building is an upscale restaurant and hotel, but the original Moorish architecture, gilt chandeliers, grand staircase and marble showcase the building’s timeless grandeur.

Swim at the Bay of Pigs

Located on Cuba’s southern coast, the Bay of Pigs is famous for being the landing site of a 1961 mission where CIA-sponsored rebels had intended to overthrow Fidel Castro’s increasingly communist government. The mission was quashed with ease – many speculate that Castro had prior information that allowed him to counter the attack quickly – and these days, the area is a tranquil paradise of unbelievably clear azure waters where visitors and locals flock to swim, snorkel and enjoy the Cuban sun. Though it’s still called the Bay of Pigs, locals are more likely to refer to it as Playa Giron.

As one of the icons of the Cuban revolution, Che Guevara is one of the most recognizable faces of the 20th century. But he wasn’t even Cuban. Argentinian-born Che met Fidel Castro in Mexico City, and played a pivotal role in overthrowing US-backed Cuban dictator Fulgencio Batista and establishing Castro’s government. Che was assassinated while on a mission in Bolivia in 1967, and in the 80s, work began on a museum and mausoleum in Santa Clara, the site of Che’s 1958 victory against Batista. When his remains were finally returned to Cuba in 1997, they were interred here in a memorial that also commemorates the other 29 combatants that died at his side. The museum houses all manner of Che’s personal effects and rarely seen photos, offering an insightful glimpse into the fascinating life of this history-making personality. Standing tall above the site is a 22-foot statue of Che, and a bas-relief wall depicting key moments of the 1958 Battle of Santa Clara.

Music is everywhere in Cuba. Almost every restaurant or bar has a resident band, and you’ll even find musicians striking up a tune in public squares around the country. No other city, though, has music so embedded into their DNA as Trinidad. Every night, locals and tourists flock to the famous stairs next to Trinidad’s Plaza Mayor to listen to the live band at Casa de la Musica. While many travelers end up sitting on the sidelines to enjoy a drink along with the music, locals will be tearing up the dance floor with sultry moves that’ll have you thinking that all Cubans are professional dancers. Join them, if you dare.

Cobblestone streets, horse-drawn carriages, colorful houses where local smoke cigars and drink rum on their porch while watching the world go by – is it any wonder that Trinidad’s old town was designated a UNESCO World Heritage site in 1988? Devote a day or two to exploring all the nooks and crannies of this charming colonial town. Pick over the wares at the many pop-up handicraft markets for souvenirs, climb the tower of the history museum for a captivating 360-degree view of the city’s burnt-red rooftops set against clear blue skies, and dip in and out of the many museums to get to grips with the area’s history.