Our Montauk Travel Guide rounds up where to stay, work out, spa, and eat in this weekend destination

In search of good vibes at “The End”, Montauk’s nickname for being on the most eastern point of Long Island’s South Fork, the under-the-radar destination is largely untouched by your typical Hampton’s crowd. Filled with raw, scenic lookout points and beaches known for surfing, 5,000 acres of parks and beaches draw travelers looking for a meaningful and low-key vacation. It’s a weekend destination filled with chic beach inns, hipster surf motels, and no shortage of outdoor activities in this familiar yet foreign paradise.

WHERE TO STAY…AND PARTY
Montauk’s best accommodations are also the most frustrating due to its limited options. You won’t find chain hotels or sprawling resorts but numerous low-key, renovated inns and motels. With New Yorker’s flocking to The End for summer, you’ll need to book your stay well in advance.

The Surf Lodge
The iconic destination is not only the hardest place to book, but one of the most exclusive places to party as it attracts a consistent line-up of live performances. With a total of 20 guest rooms, the luxury lodge is nestled on Fort pond with a tiny Tracy Feith shop, a restaurant helmed by Top Chef star Sam Talbot, and surf movies on rotation in the lobby. The hammocks and beachside bonfires add laid-back atmosphere. To get around, The Surf Lodge has their own chauffeur service if you’re staying as a guest, and free entrance to all the exclusive parties held on weekends.
thesurflodge.com

Montauk Beach House
With 33 lofty guest rooms, including a half-acre European style beach club and a cafe on the property, Montauk Beach House remains a major part of Montauk’s social scene. The Beach House is famed for holding pop-up boutiques, wellness sessions, and live DJs through the night. It’s a great spot for drinks in the late afternoon, and for a rowdy time, you’ll have to book the cabanas in advance.
thembh.com

Hero Beach Club
For younger travelers out to embrace the party scene, Hero is a low-key, recently renovated hotel with 34 rooms outfitted entirely by famed interior store West Elm and Balinese imports. With a pool surrounded by day beds and its location right on Kirk Beach, Hero is much more tranquil compared to its counterparts, and close to town for quick bites and shopping.
herobeachclub.com

WHERE TO GYM
With headquarters located in Manhattan, studios of all kinds have made their way up to The Hamptons with HIIT, cycle, barre, yoga, Pilates, and more located all-around Montauk as well as Bridge, South, and East Hampton. By car, studios are no more than half an hour away, but due to traffic, we suggest heading out earlier or finding a studio closest to you for a good sweat sesh during vacation. 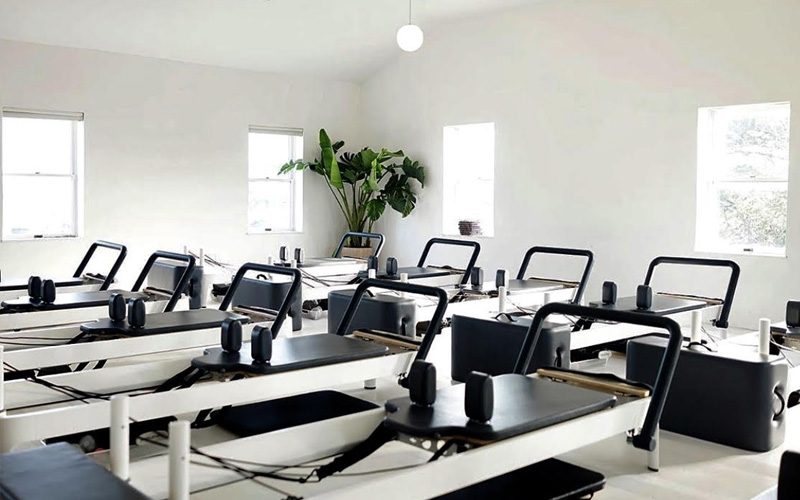 New York Pilates Montauk
The popular downtown Manhattan fitness studio has opened its doors in Montauk with your favorite resistance reformer strength training which lengthens and tones your body. The dreamy space is outfitted with 14 reformers and a retail shop and is located off Montauk highway featuring a private deck overlooking Fort Pond and walks away from the ocean.
newyorkpilates.com

SoulCycle Montauk
For a high intensity cardio, the revolutionized cycle studio has brought its rockstar instructors for an inspirational and energetic fitness experience. Their most popular morning classes are at capacity in the mornings and stretch out till the afternoon.
soul-cycle.com

WHERE TO SPA
While the spa scene in The Hamptons is scattered, Montauk’s laid-back scene has brought in pop-ups. It is also known for its famous massages, salon appointments, and manicures, making you look great at the party or on the water.

Seawater Spa at Gurney’s Montauk
Located at Gurney’s seawater property, the re-imagined spa includes an Olympic-sized saltwater swimming pool, which uses sand-filtered water drawn from the sea, and a Finnish-style sauna where guests can experience a steam, infused with aromatherapy-enhanced water over hot stones and eucalyptus. As one of the only boutiques open all year round, Gurney’s Seawater Spa is the place during off season for facials, massages, and any treatment you desire.
gurneysresorts.com

Chillhouse
The destination for self-care is here. Located in New York Pilates Montauk Summer House, Chillhouse is famed for its Instagrammable manicures, pedicures, and its soothing massages. It’s a place to wind down after a good, NY Pilates class, and a place to pick up their cool retail, beauty, and home merch in Montauk.
chillhouse.com

WHERE TO EAT
Restaurants become the life of the party after dark, and booking reservations are key in securing a table amongst hotel guests and regulars who know the schedule. If not, you’re stuck eating dinner at 5PM, and if you’re game for eating late, no tables will be available before 9PM.

Scarpetta’s Beach
For your fix of fine Italian food, you can’t look to anywhere else except Gurney’s Montauk for dinner. This famous restaurant is open year-round and is a sister restaurant of the famous Manhattan spot. With a gorgeous, beach view off Gurney’s seawater property, you’ll be impressed with its fine dining-infused dishes off the wooden deck, which includes their silky pastas and large scallops, vintage wines and Cédric Grolet-influenced desserts.
gurneysresorts.com 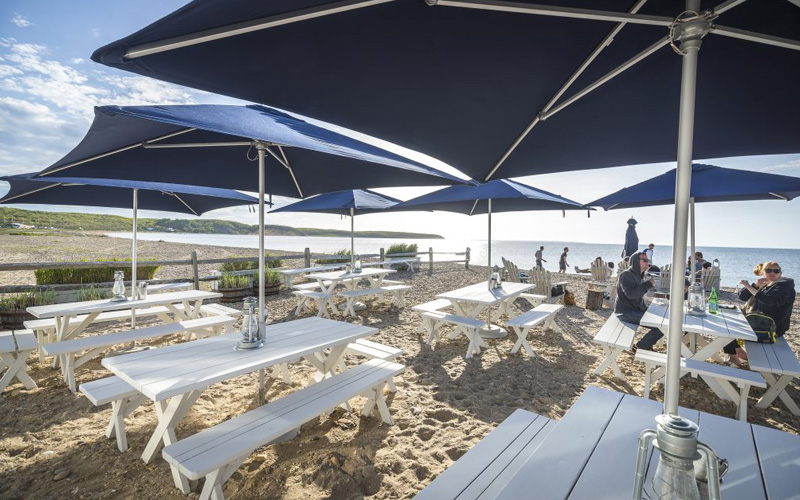 Navy Beach
Navy Beach Restaurant serves casual waterfront seafood dishes that are filled with vibrant color and made for sharing. By large, the menu is filled with contemporary classics such as poke, yuzu yellowtail, tacos, watermelon and feta salad, and lobster rolls. I recommend going to Navy Beach around 11:30am to enjoy the quiet setting before it gets busy. Afternoons get rowdy with party-goers rolling up, but it remains an amazing stop for sunset drinks before dinner.
navybeach.com

Inlet Seafood Restaurant
Located off the shores of Gin Beach, Inlet feels like a vacation home where you’d host celebratory events with its large, and lofty space and deck upstairs. Complete with a bar area, including a sashimi bar, the Star Island restaurant serves comforting New England classics such as lobster rolls, and garlic white wine mussels which are a must-order as an appetizer.
inletseafood.com

Showfish
For celebratory dinners, Showfish is the place to be. Famed for its Fruits de Mer platter, and fresh catches, dinners are filled with heaping towers of oyster, crab claws, whole lobsters and shrimp cocktails caught right of the docks of The Hamptons. Remaining vegetable forward, this restaurant doesn’t disappoint, and its sustainable harvesting program gives guests a clue where to source Long Island’s best quality seafood. The Uni Butter Pasta is a must order – creamy sea urchin doesn’t overpower the dish, and it is filled with crab, all intertwined with silky al dente linguini. It’s just drool-worthy to think of it.
showfishmtk.com