Do you want to know where to head for some Instagram-worthy photos? We’ve rounded up our top 17 Instagram spots in Asia

More and more travelers are arranging their trips around scenic locations for that perfect holiday photo. Here are some of the most underrated Instagram spots in Asia you can’t miss. Save these locations for some seriously impressive backdrops on your next vacation.

1. SITUS WARUNGBOTO – YOGYAKARTA, JAVA, INDONESIA
This historical leisure home from the 18th century only recently was made available to public visitation. The site is covered by dried up pools and canals, likely to also resemble a bathhouse when it was originally built. Most interestingly, in the middle of Yogyakarta, is a deserted home full of cascading stairs, almost as if you stepped into a Spanish premise. Come find it in Indonesia. 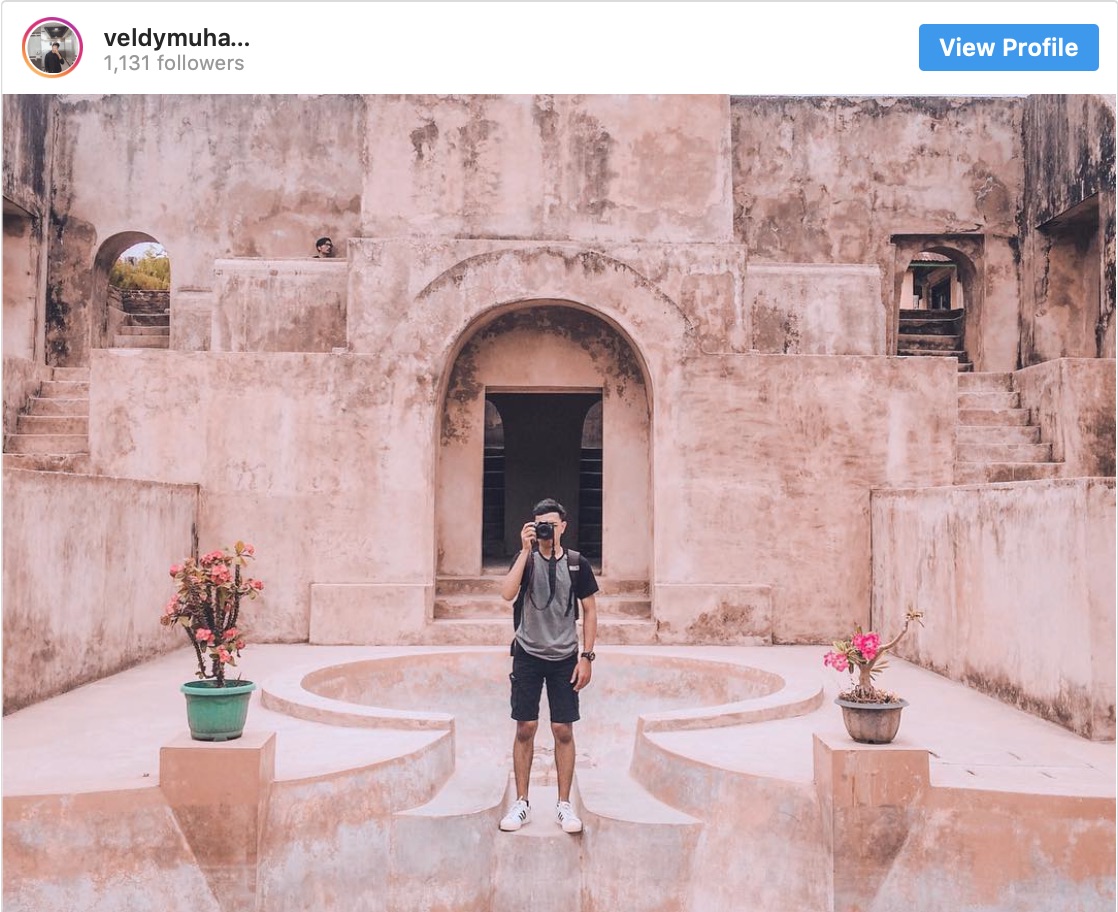 2. PURA LEMPUYANG – BALI, INDONESIA
The best place to view the almighty Mount Agung is atop this temple. The best way to admire the volcano is to hike up the 1,000+ steps to the top of this pura (temple) just in time for sunrise. It’s not for the faint hearted, but nor is the view! 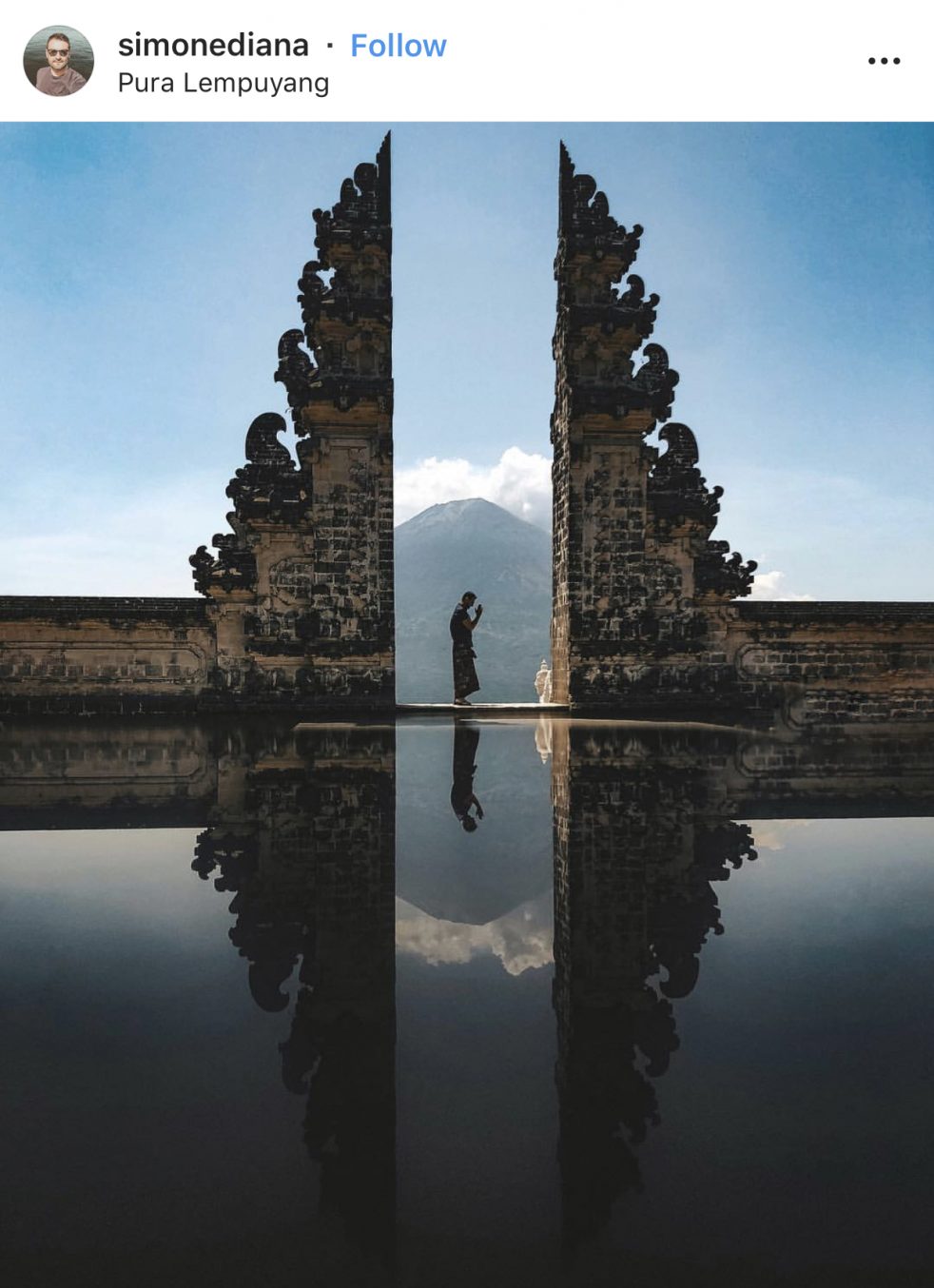 3. ANGEL’S BILLABONG – NUSA PENIDA, INDONESIA
Just a 40-minute boat ride away from Bali is this less-traveled island of Nusa Penida, where most roads are broken, cell signal spare, and ultimately a deserted island of tranquility. It’s also well known for this heavenly retreat. You can climb down to the billabong and float atop this azure oasis as ocean waves hit on the edges of the billabong in epic proportions. Did you know that some fishes live in the billabong also? 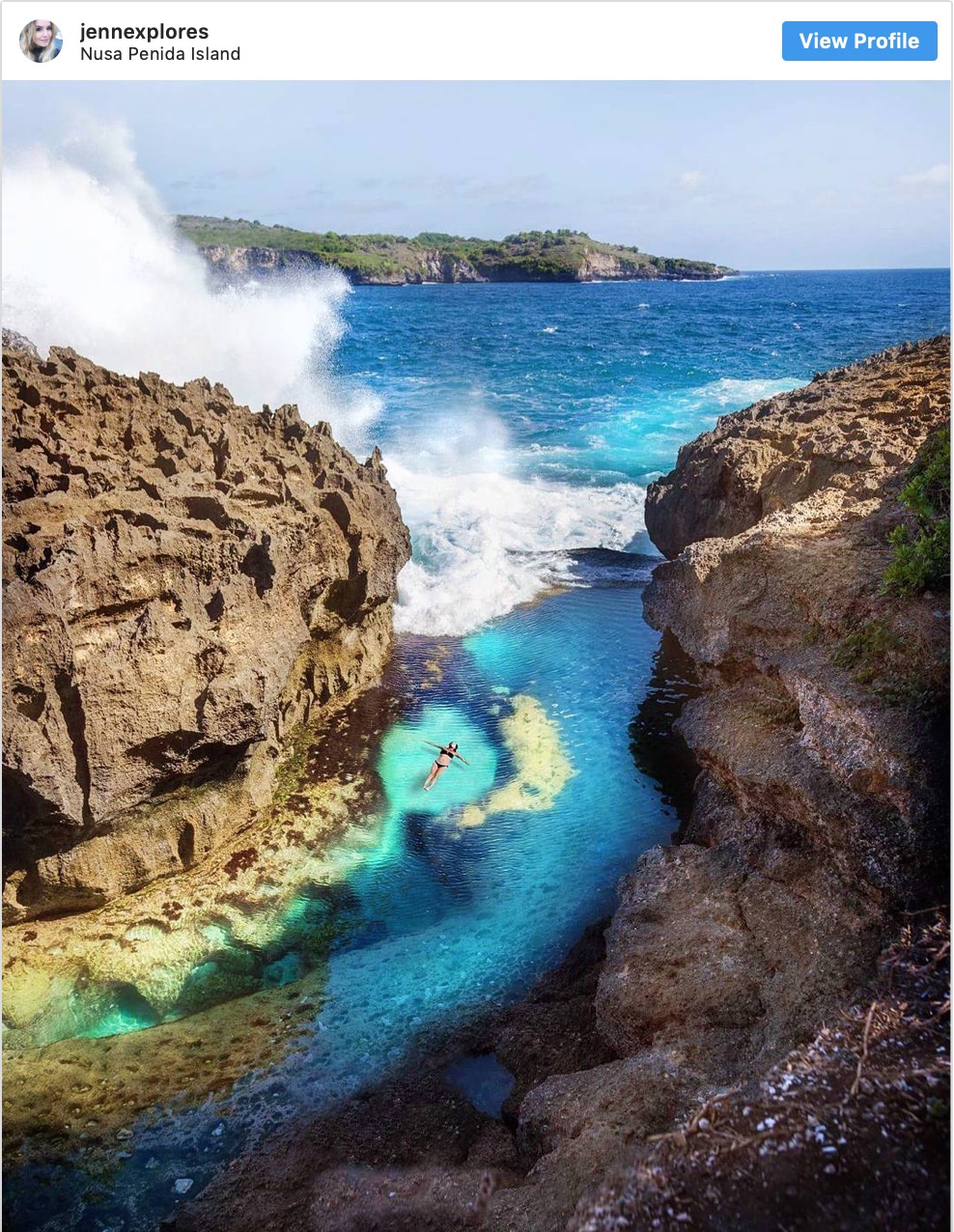 4. HEAD OF SANDSTONE BUDDHA – AYUTTHAYA, THAILAND
Perhaps like an Asian set of Game of Thrones, this place is an archeological gem, packed with Buddhist temples, monasteries and statues. Yes, there is a sandstone Buddha head nestled in tree roots in this ancient city, harking all the way back to 1350 when it was first founded. Now a UNESCO site, it borrows the historical charm of Bagan and Siem Reap, without the crowds. 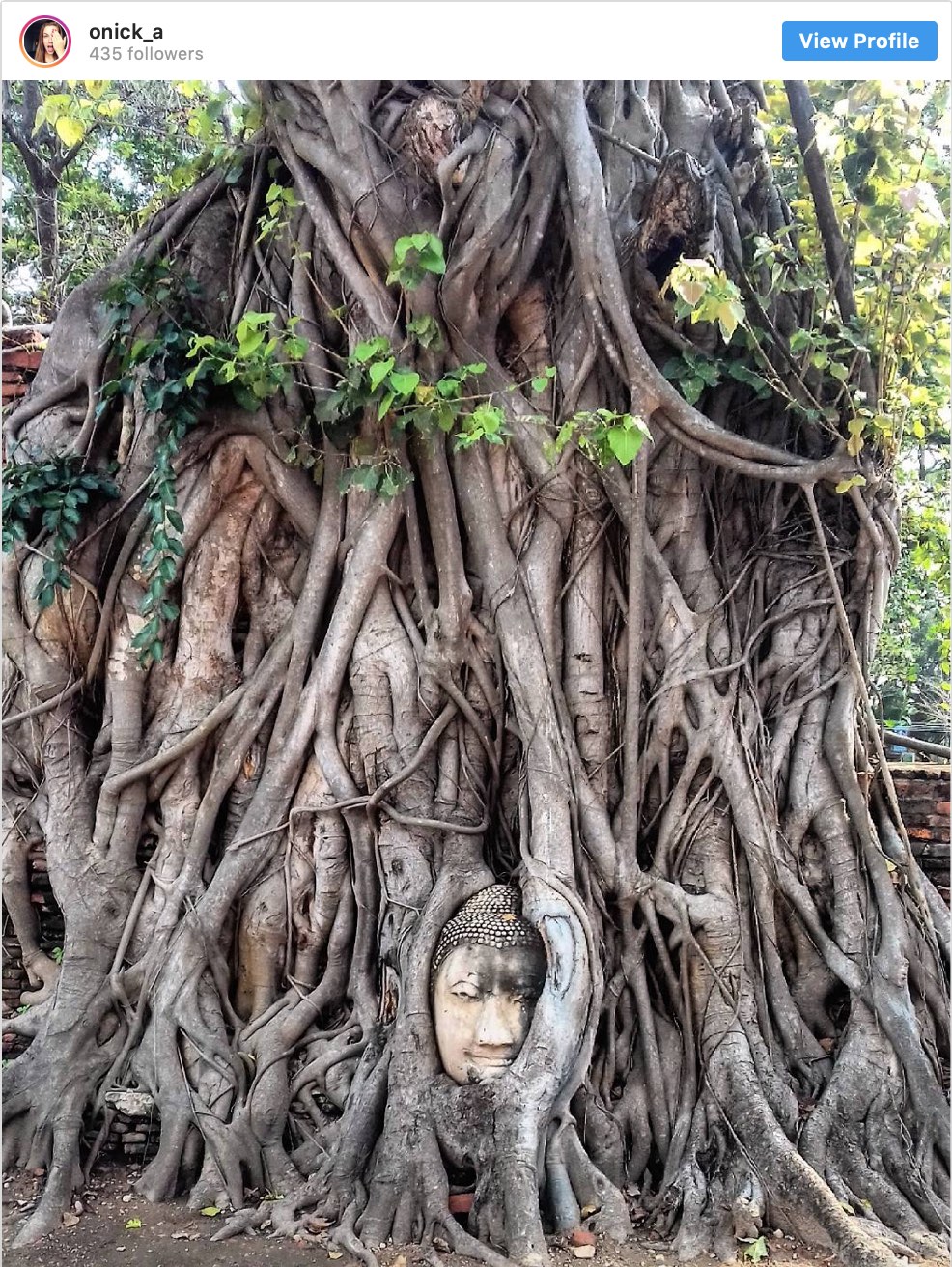 5. ZHANGYE DANXIA NATIONAL PARK – GANSU, CHINA
Who said only Peru had Rainbow Mountains, China too! The park is located in the northern foothills of the Qilian Mountains, and is the result of sandstone and other minerals that have been deposited from 24 million years ago. The Chinese National Geography magazine deemed it as one of the “six most beautiful landforms” in the country. While a bit cumbersome to commute to, the park’s orange hue juxtaposed against a rainbow array of colors will leave your memory imprinted. 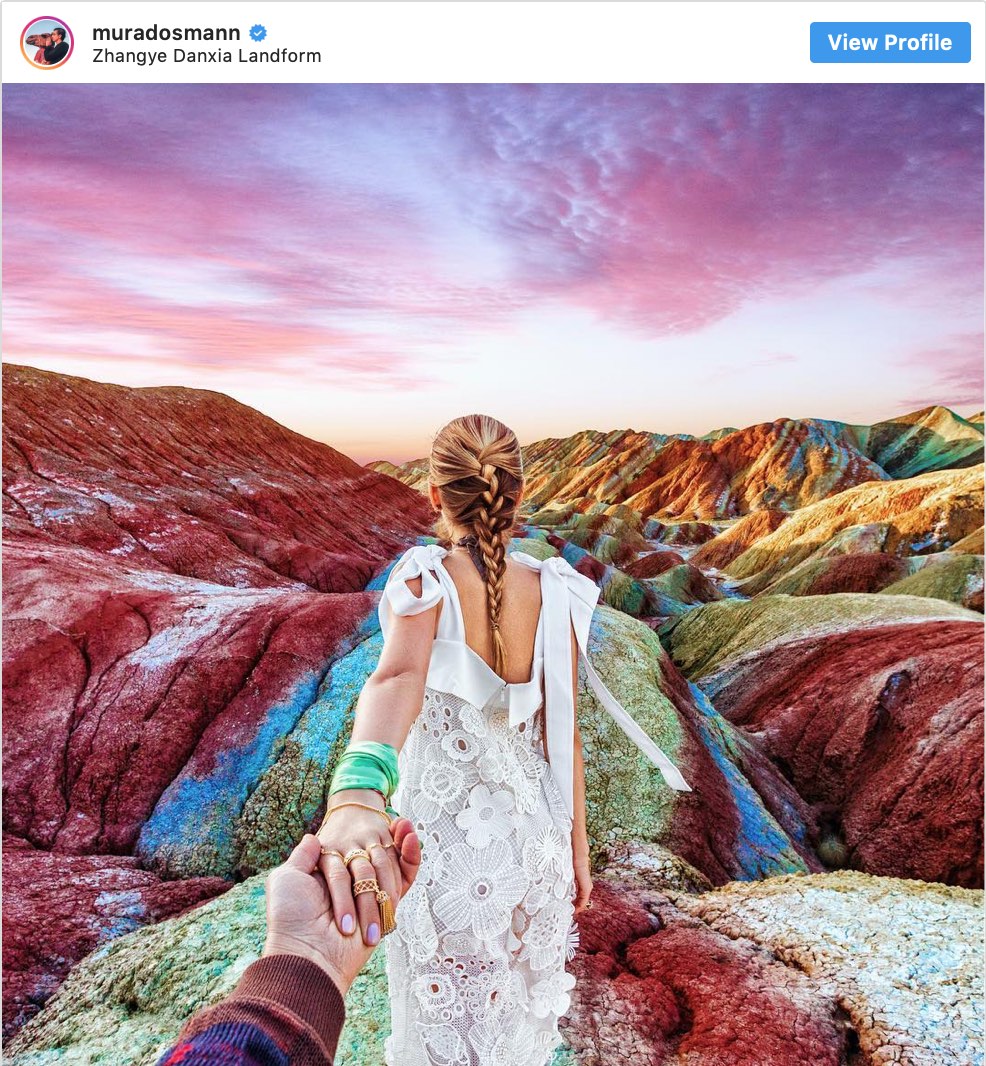 6. MOUNT IJEN – JAVA, INDONESIA
There is nothing quite like hiking up this mammoth of a volcano in pitch-darkness to a 20m-wide caldera, only to catch a glimpse of the blue flares at the top of the crater. The blue flares occur when sulphuric gas meets the atmosphere, heating up to almost 600 degrees Celsius. As you ascend the mountain, you’ll also be accompanied by one of 200+ mining families who make the trek nightly to extract and bring down about 14 tons of sulphur daily. The sunrise atop is simply breathtaking with Mount Bromo in the far distance. Note to self: bring a gas mask and dress extra warmly!

7. DEMODARA RAILWAY STATION – DEMODARA, SRI LANKA
The Nine Arches Bridge is jaw-dropping at first glance, and no less when you learn that it was built almost 100 years ago. It is deemed one of the best examples of British railway constructions during the Ceylon colonial times. You can inquire from locals when trains are expected to pass and stop on the bridge for truly incredible moving footage of the bridge in action. When no trains are expected to pass, you can actually even walk on, lay on, or sit on the edges of the bridge. Safety first! 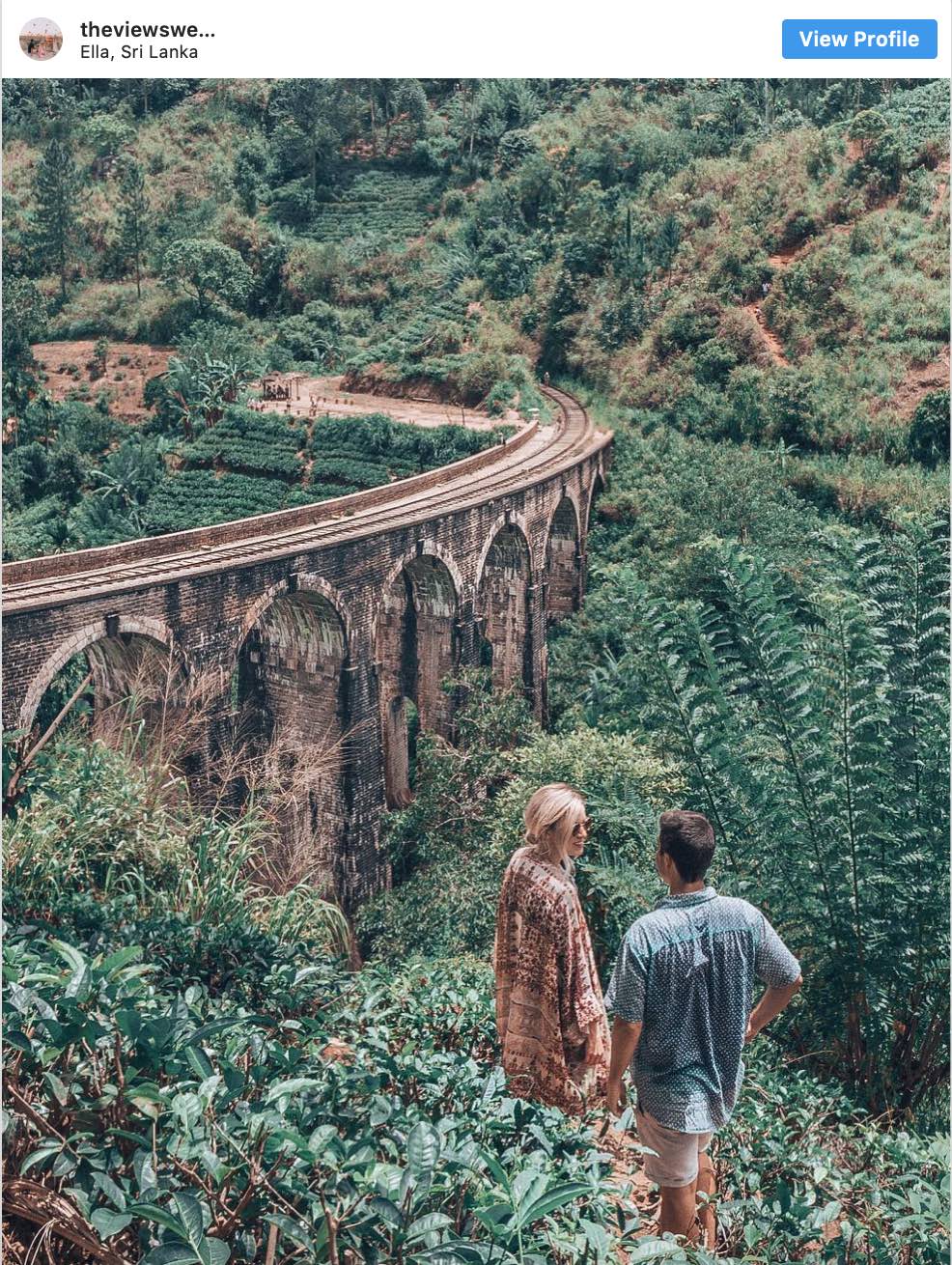 8. SAND DUNES – TOTTORI, JAPAN
Most people don’t even know that in western Japan lies a 30m-long and 50m-high desert on an ocean front. Yes, a desert in Japan. The sand dunes were created thousands of years agao, as sand from the nearby river got washed out to sea and redeposited along the ocean’s current. Watching the sunset atop the sand dunes while breathing in that ocean breeze – there truly isn’t anywhere quite like this, especially if you can enjoy an onigiri or two while admiring the view. You do have to catch a few trains (and a bus) to get here, but be assured that it will be every bit worth the trip. 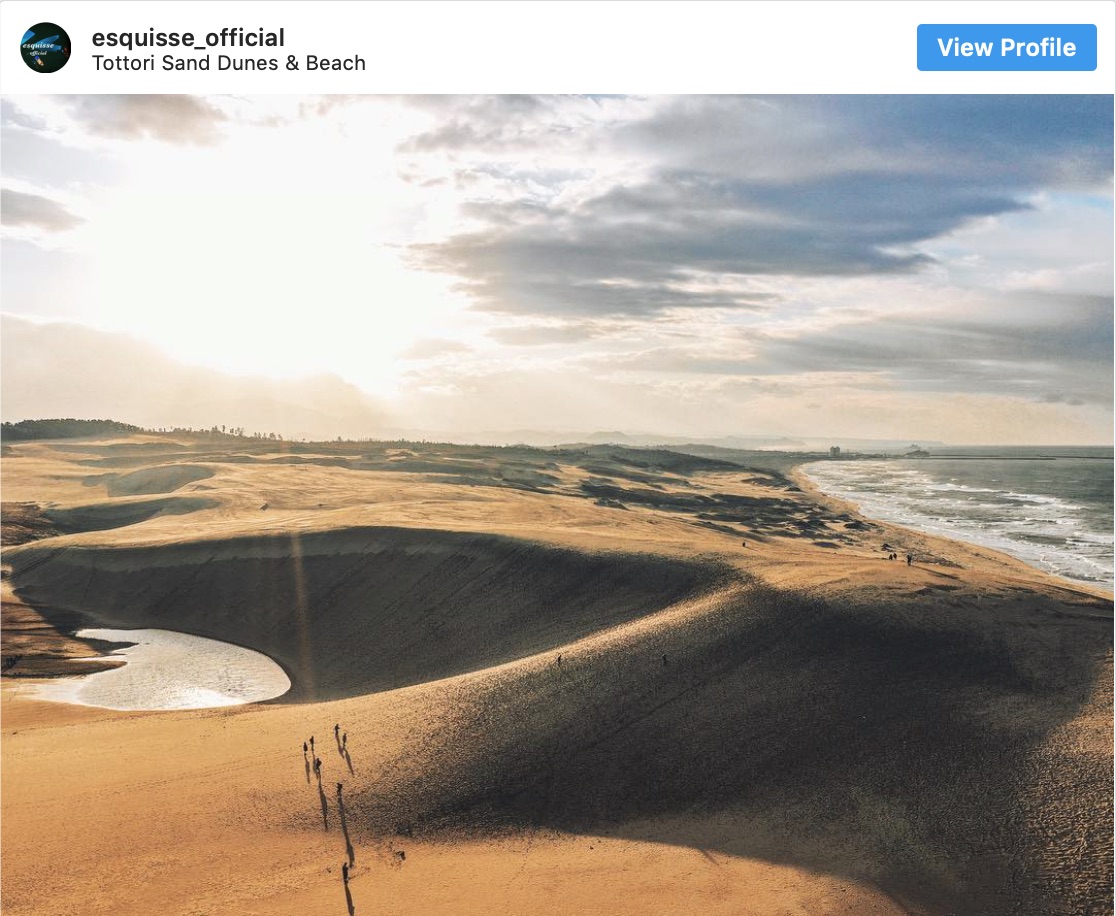 9. BEACH SWING – UNAWATUNA, SRI LANKA
Finding this swing and this beach in itself is an adventure. Just an hour south of the capital Colombo lies a stretch of white unspoiled beach on the southern tip of Sri Lanka. Unawatuna is especially beautiful because of an adhoc rope swing tied to an iconic palm tree. You probably have seen some Instagram posts of the fuchsia sunsets here, so come for a swing and experience it yourself. 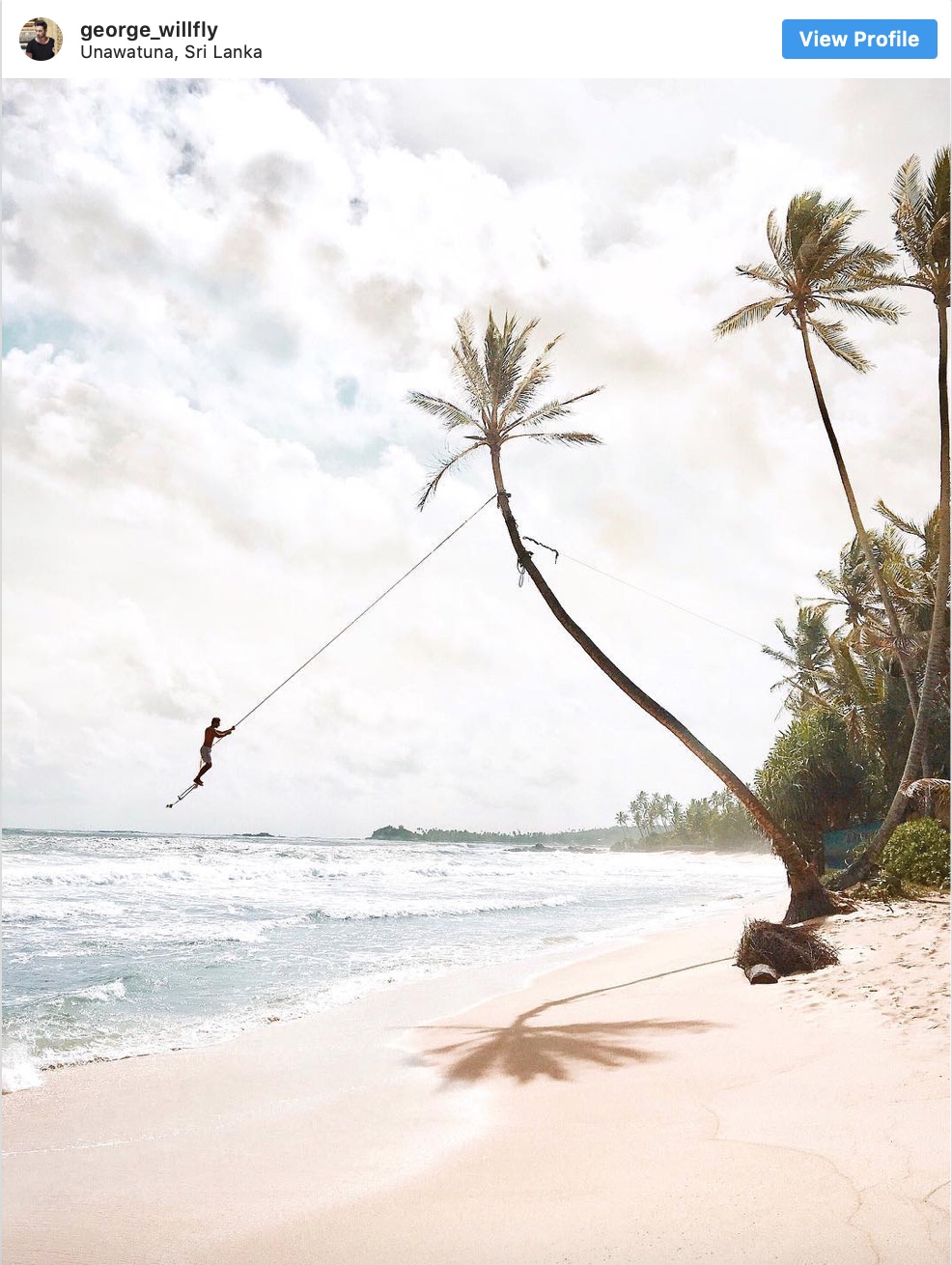 10. HIGH CLIFF AT MELASTI BEACH – BALI, INDONESIA
Now you’re already well acquainted with Bali’s Ubud and Seminyak, and you’re wondering what else the island has to offer? Look no further than Melasti Beach (amongst many other cliffside beaches in Uluwatu). It feels like the ends of the world here, sea breeze brushing with crushing waves at the bottom of pristine white cliffs. 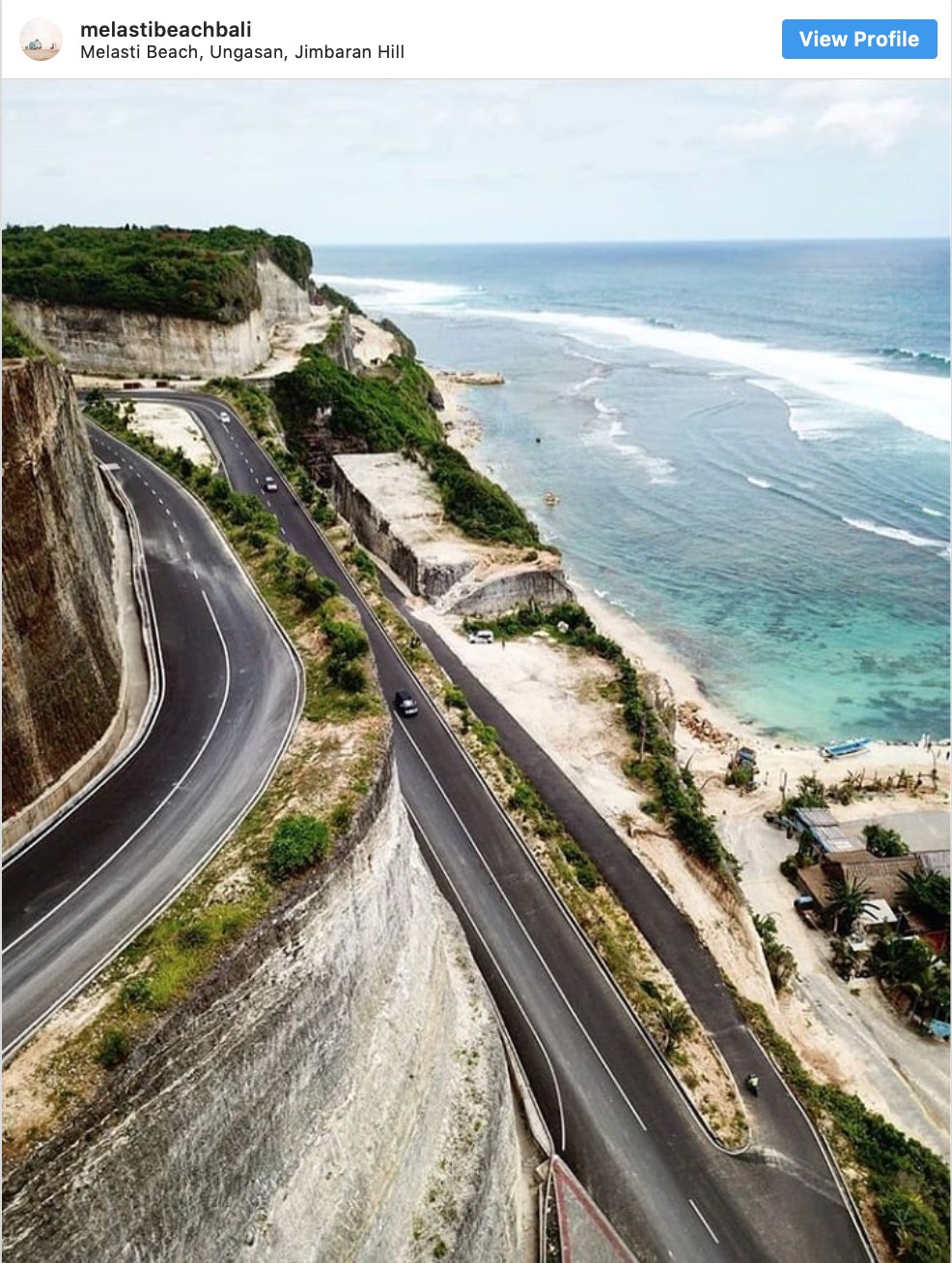 11. MOUNT MAYON – LEGAZPI, PHILIPPINES
Do you remember when you used to draw a mountain when you were a child? It likely was a perfectly symmetrical triangle with a pointed summit. That’s exactly Mount Mayon in Legazpi. Although it recently erupted, as one of the most active volcanoes in the Philippines, it is a sight to witness for yourself. 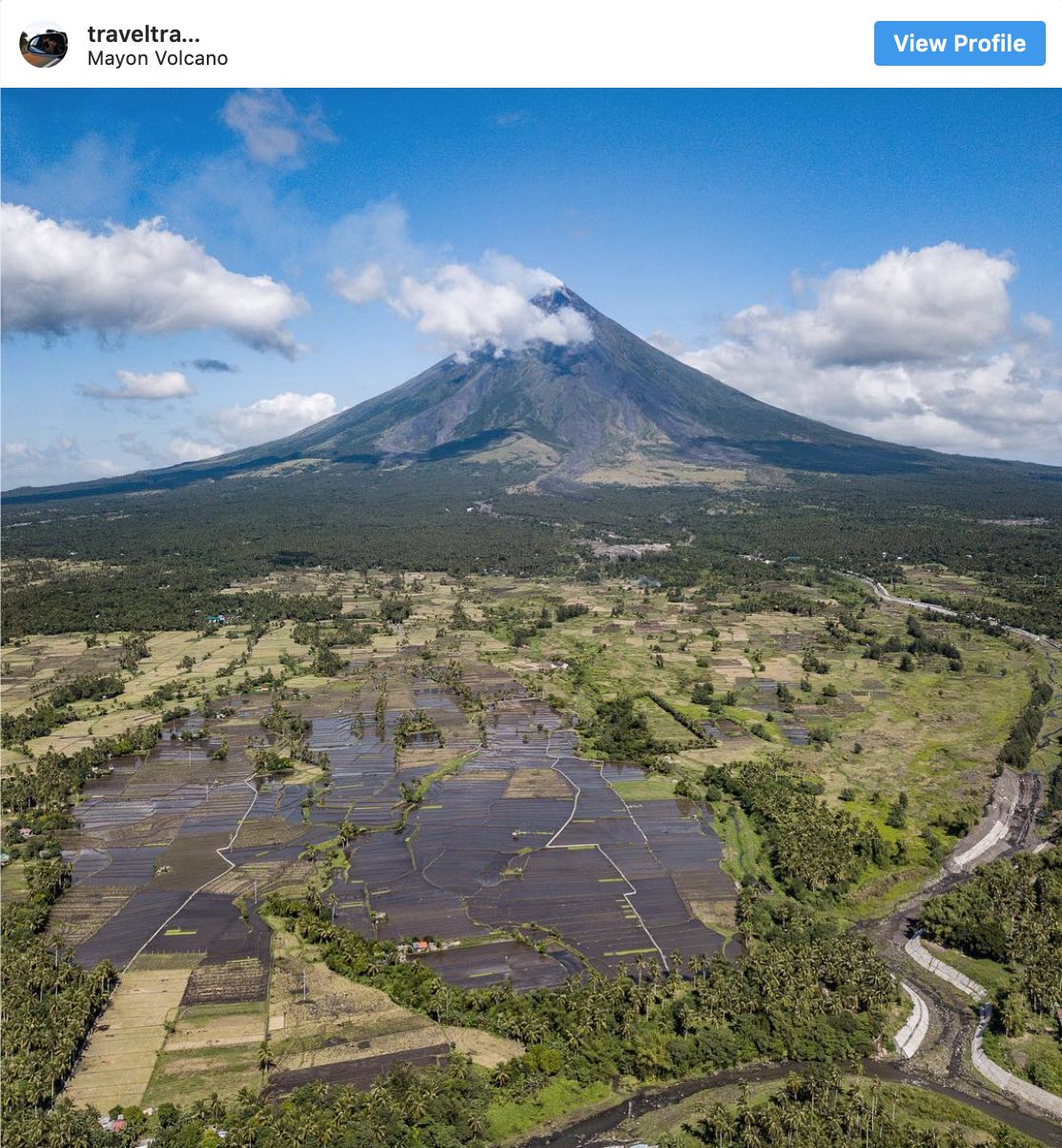 See also: 10 Things to do in Bohol

12. LANTERN FESTIVAL – CHIANG MAI, THAILAND
Once a year, at the Yee Peng Festival, thousands of lanterns are lit and flown into the night sky to make a wish for good fortune in the new year, during the month of November (according to the Thai lunar calendar). The spectacle draws visitors from around the world, all in the hope of feeling enlightened and inspired during the visceral experience. It’s really like no other celebration. 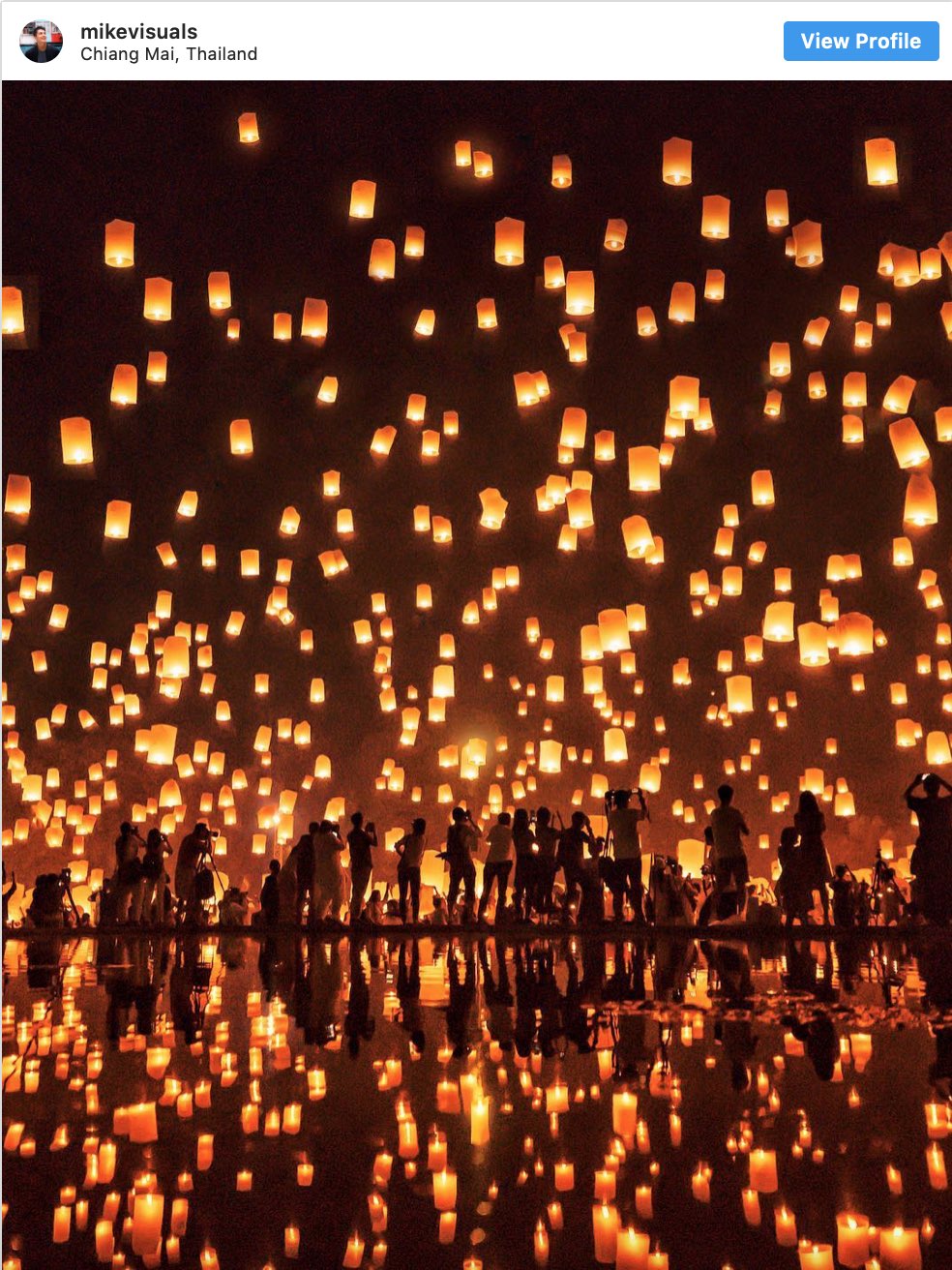 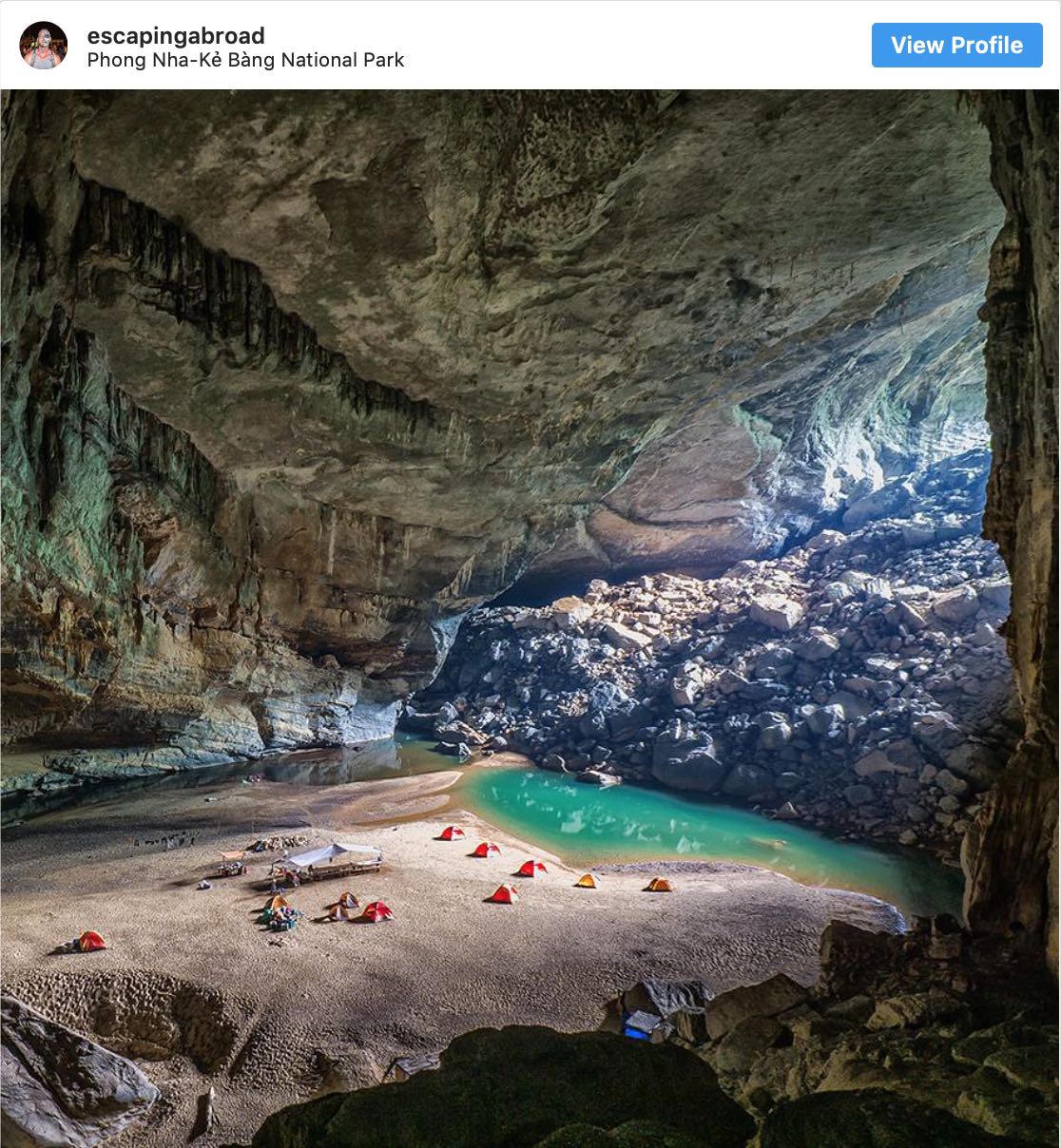 14. TAIWAN INTERNATIONAL HOT AIR BALLOON FESTIVAL – TAITUNG, TAIWAN, ROC CHINA
Unlike the Chiang Mai Lantern Festival, which is also on this list, the Taiwanese one has its own claim to fame by way of a hot air balloon festival, usually lasting over six nights with various themes. It’s exactly as the name suggests, where colorful creations rise to the sky in competition to draw international attention to the beautiful Taitung sceneries. You can enjoy the experience of course from the sky or down on the ground – depending on your fear of height. 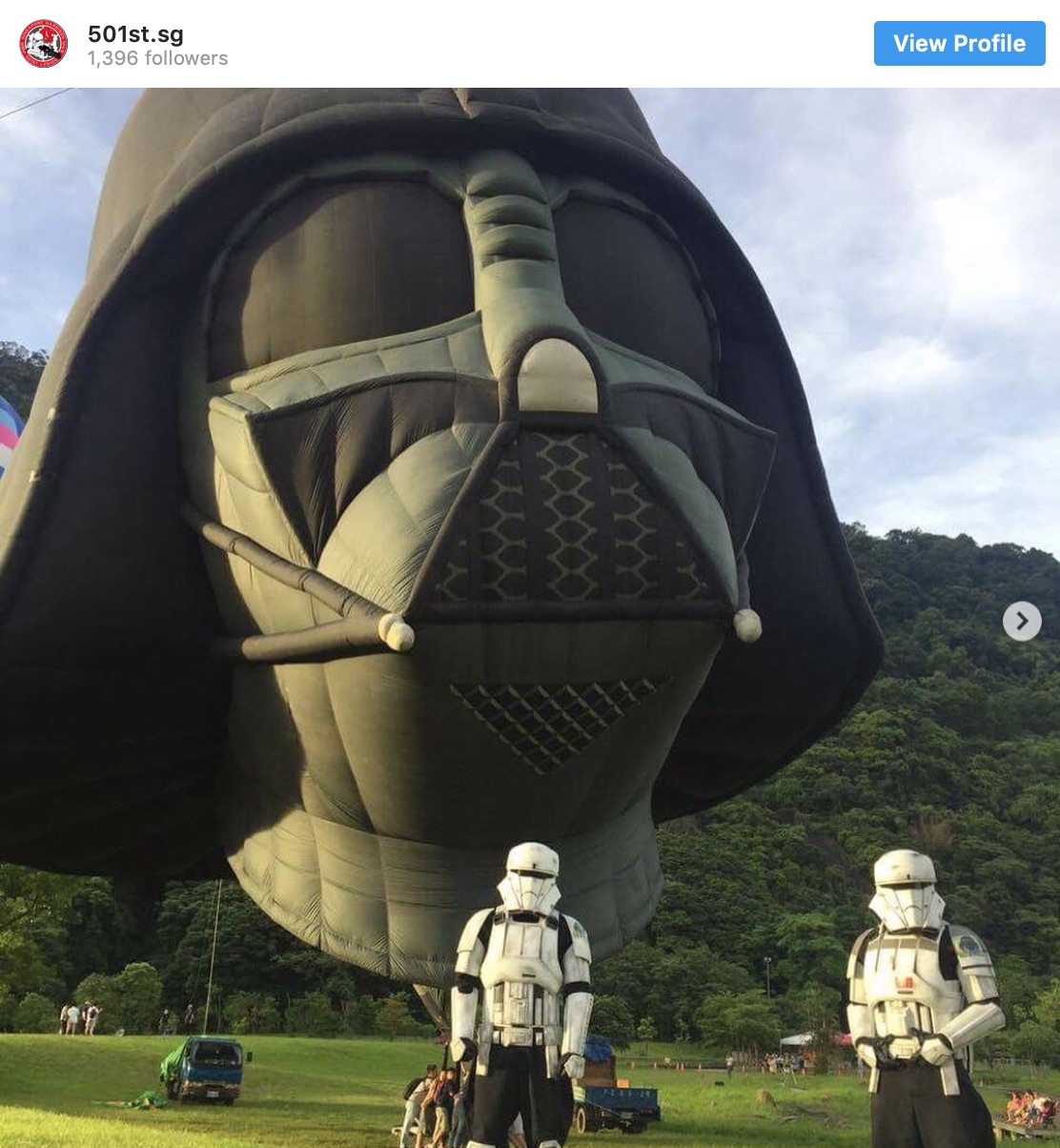 15. BINHAI LIBRARY – TIANJIN, CHINA
Nicknamed “The Eye”, the Tianjin Binhai Library is intentionally designed to look like a 3D eyeball, staring out through the building. This has been a new darling by Instagrammers of late, and it’s no surprise why. Having opened in October 2017, terraced bookshelves span five floors and are home to 1.2 million books! How’s this to get you to read more? 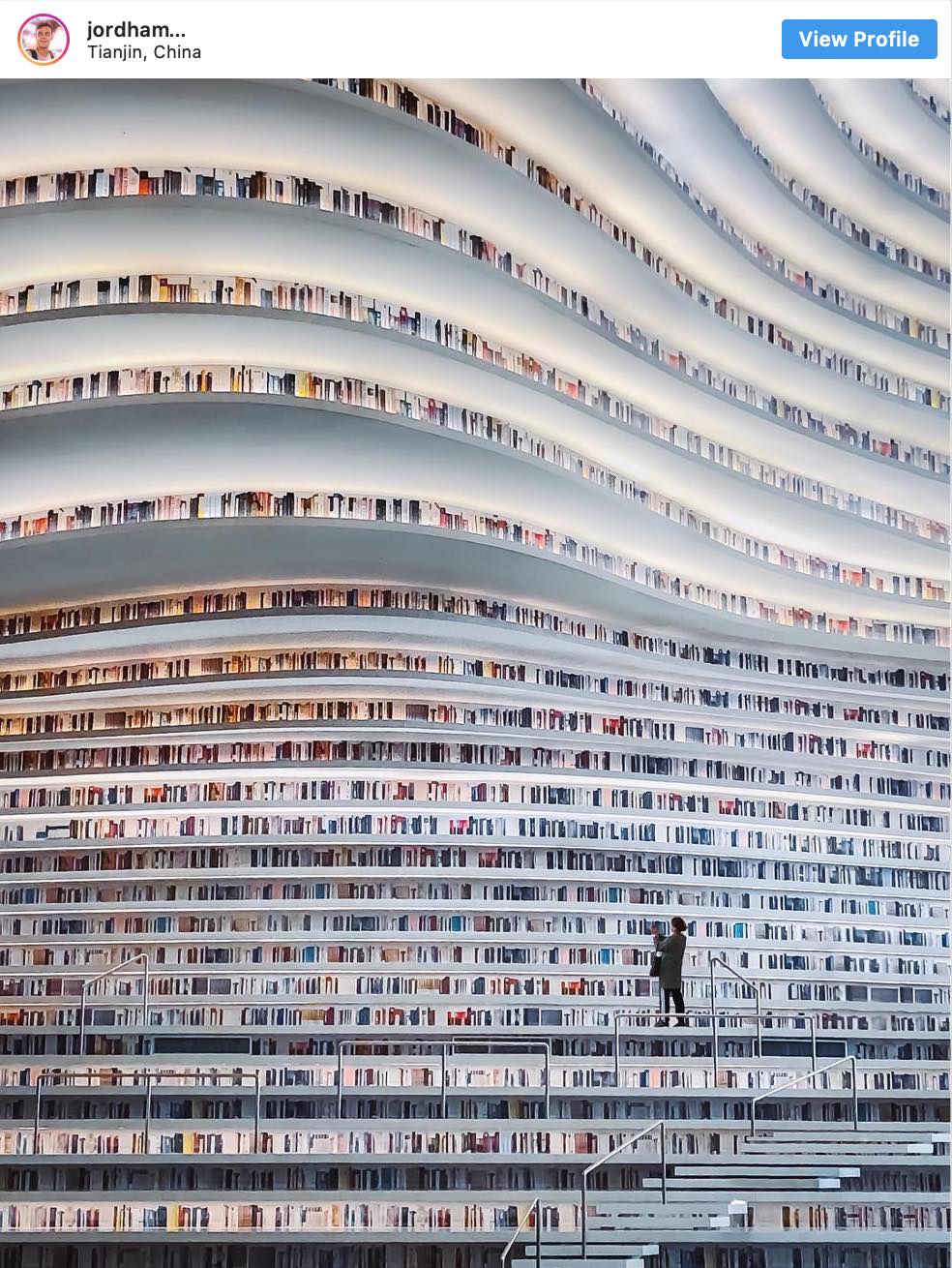 16. THE GIBBON EXPERIENCE – HUAY XAI, LAOS
You had me at outdoor shower. This jungle childhood fantasy in the middle of Laos is well known for its zipline mazes, in fact boasting some of the world’s longest and highest ziplines, with the largest reaching 1,870 feet. Whether you stay a few hours or embark on a 3D/2N zipline excursion (yes, this is a possibility!), you can end your trip sleeping in a treehouse imagining the life Tarzan had. 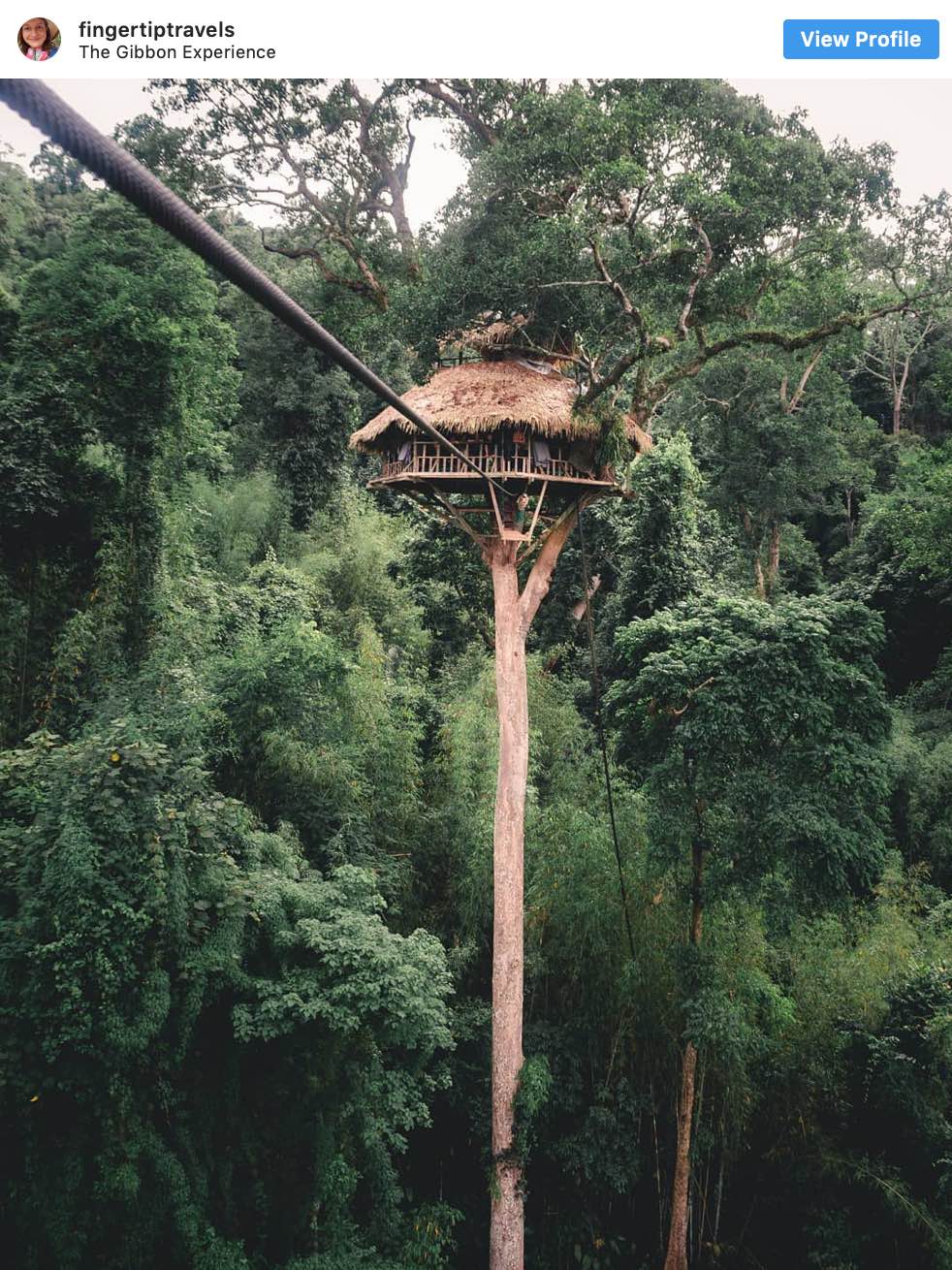 17. BLUE CITY – JODHPUR, INDIA
Otherwise known as the blue city, Jodhpur is also home to some unlikely surprises – one of Tripadvisor’s top hotels of the world (Taj Hotel’s Umaid Bhawan Palace), huge langur monkeys in the Mandore Garden, and the dozens of century-old forts atop rocky cliffs. The city was painted blue to keep the houses cool in the scorching summer heat. It truly is best experienced than seen just via photos. 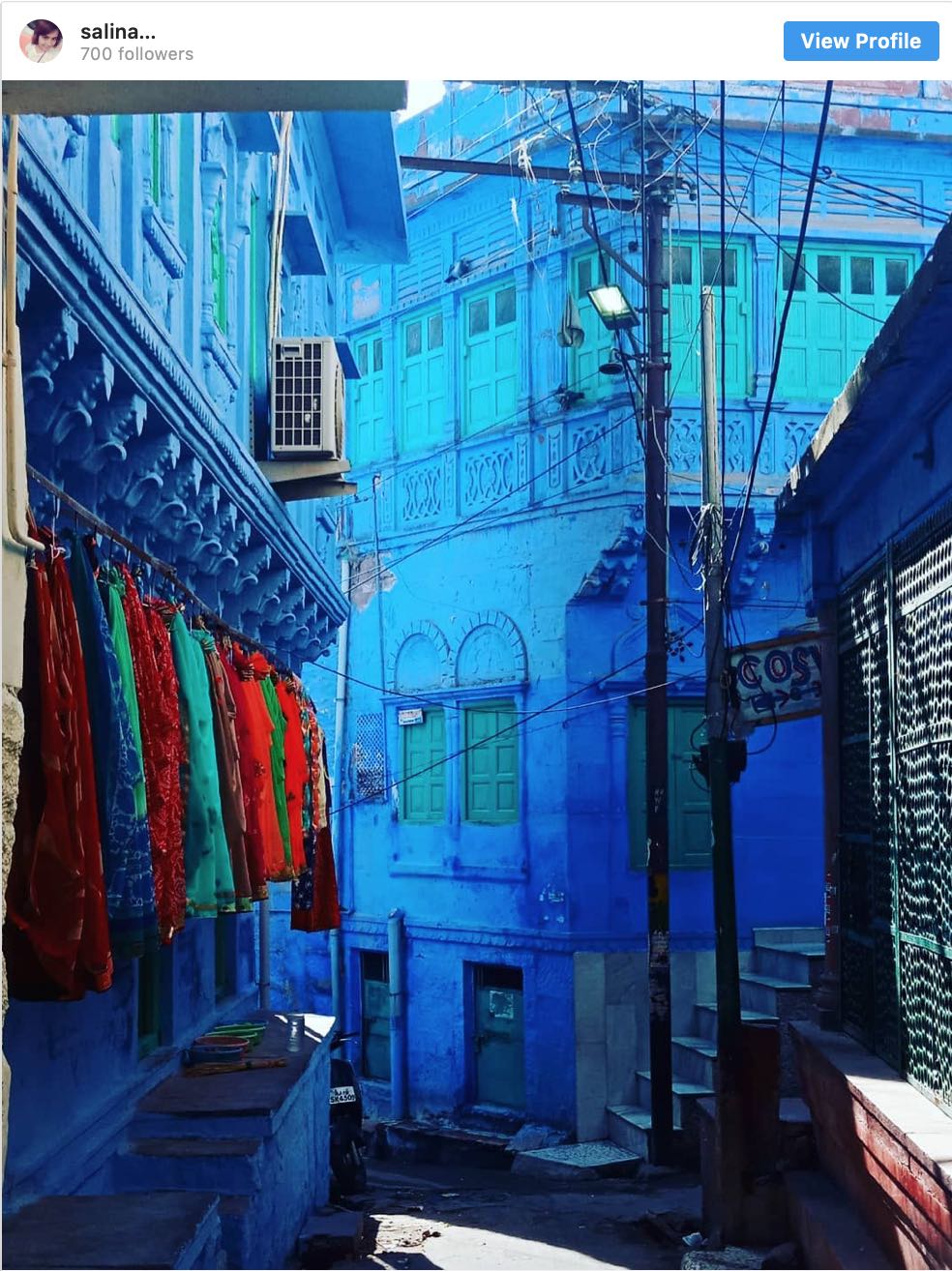